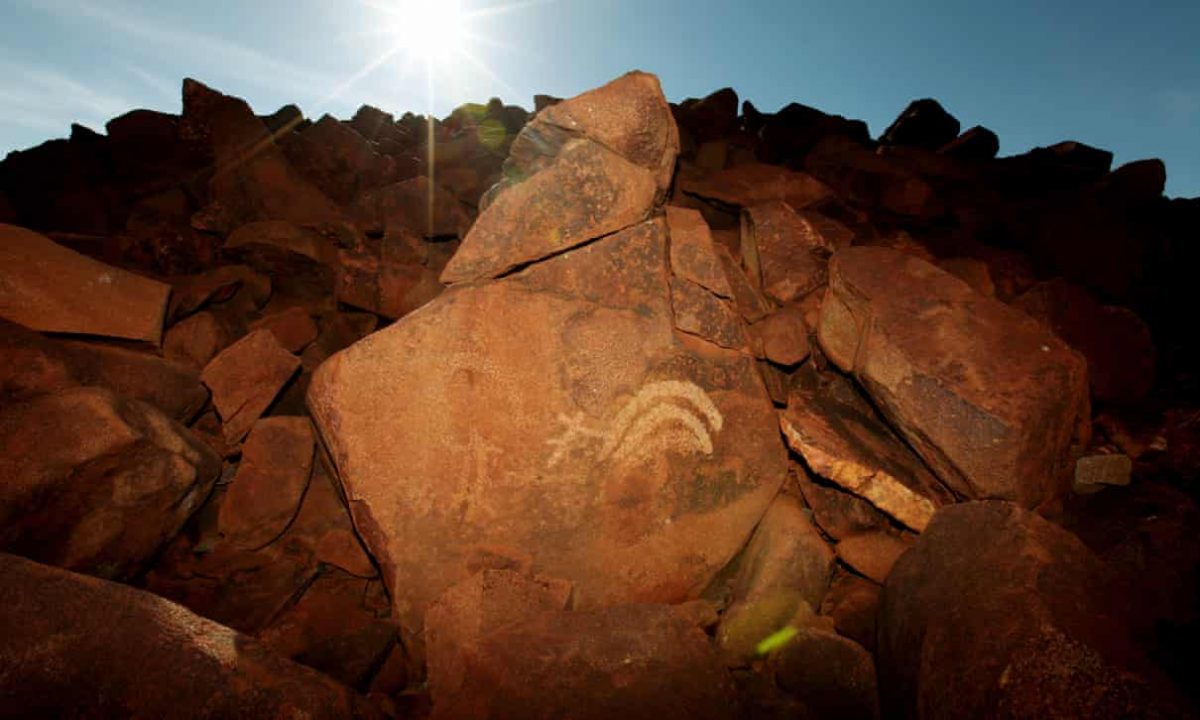 A Senate report warning of damage to the 50,000-year-old treasures has persuaded the state government to act.

The Western Australian government has formally committed to pursuing world heritage status for the Burrup peninsula, one of the oldest and richest examples of rock art in the world.

It comes five months after a Senate inquiry report into managing the site warned that the cumulative emissions from heavy industry on the peninsula, centred around the north-west shelf gas project, could be damaging the surface of the rock art and causing it to degrade.

The step towards nomination has been welcomed by rock art experts, who say it is one of the most significant archeological sites in the southern hemisphere.

“The thing that is unique about this is that it covers almost the entire origin of the north-west coast of Australia, and it is hunter-gatherers from the bottom to the top,” director of the University of Western Australia’s centre for rock art research and management, Jo McDonald, said. “Nowhere else has it covered 50,000 years of hunter-gatherer human history.”

There are more than 1m catalogued petroglyphs on the Burrup peninsula and surrounding islands of the Dampier archipelago, dating back 50,000 years. The newest petroglyphs were carved in the 1800s, before the Yaburara People, the artists, were killed or driven off the land in a period of sustained killings in 1868 known as the Flying Foam massacre.

The site is now in the custodianship of the Ngarluma, Mardudhunera, Yindjibarndi, Wong-Goo-Tt-Oo peoples, as well as the surviving Yaburara people. Those groups are represented by the Murujuga Aboriginal Corporation (MAC), which jointly manages the Murujuga national park and the national heritage listing for the rock art. MAC said it was important for the cultural and archeological significance of the site to receive international recognition.

“It’s always been talked about, for the past 30 years, but we have not been in a position that we are in now where we can be the drivers of the process.”

WA premier Mark McGowan signed a referral letter with four of the five language groups in MAC at a ceremony at Hearson Cove on the Burrup Peninsula. The Yaburara people declined to sign.

The application will then be referred to a stakeholder group for consultation. It is not expected to be referred to the UNESCO world heritage committee before 2021.

Environment minister Stephen Dawson said he was confident that the newly named federal environment minister Melissa Price, whose electorate of Durack includes the Burrup peninsula, would support the application. Price is scheduled to meet with MAC in two weeks.

Dawson said the boundaries of the application were yet to be determined but it was likely to follow the 2007 national heritage listing, which includes the Dampier archipelago.

He said concerns around industrial emissions would be canvassed in a separate stakeholder group established as part of the Burrup rock art strategy, which is due to hold its first meeting next week. That group will look at monitoring the impact of cumulative industrial emissions on the pH of the rocks.

“Hopefully we will have good science because one of the issues we have had over the years is that people who were doing the science weren’t doing it right,” Dawson said. “We don’t have the baseline data.”

He said it was unlikely any new industrial developments would be built on the Burrup before that data could be collected, but added: “there’s nothing at this stage that says definitively what is happening here so we need to get that information.”

The state government flagged pursuing a world heritage nomination in 2003, when it signed the Burrup and Maitland industrial estate agreement with traditional owners to extinguish some areas of native title in order to allow continued industrial development.

Labor senator Pat Dodson, who sat on the Senate committee into the Burrup, said he was pleased the nomination would be put forward.

“I would hope that the truth-telling that the people were talking about at Uluru [in the Uluru Statement] would go hand-in-hand with this nomination process,” Dodson said. “The cultural sites and significance of those sites is part of our history and should be given a far higher level of protection.”

Robin Chapple, a state Greens MP who has been involved in the campaign to preserve the Burrup rock art since the 1970s, said the world heritage nomination should be accompanied by a promise by the state government to relocate any further proposed developments on the Burrup to the Maitland industrial estate, on the other side of Karratha.

“We need to get them off the rocks,” he said.