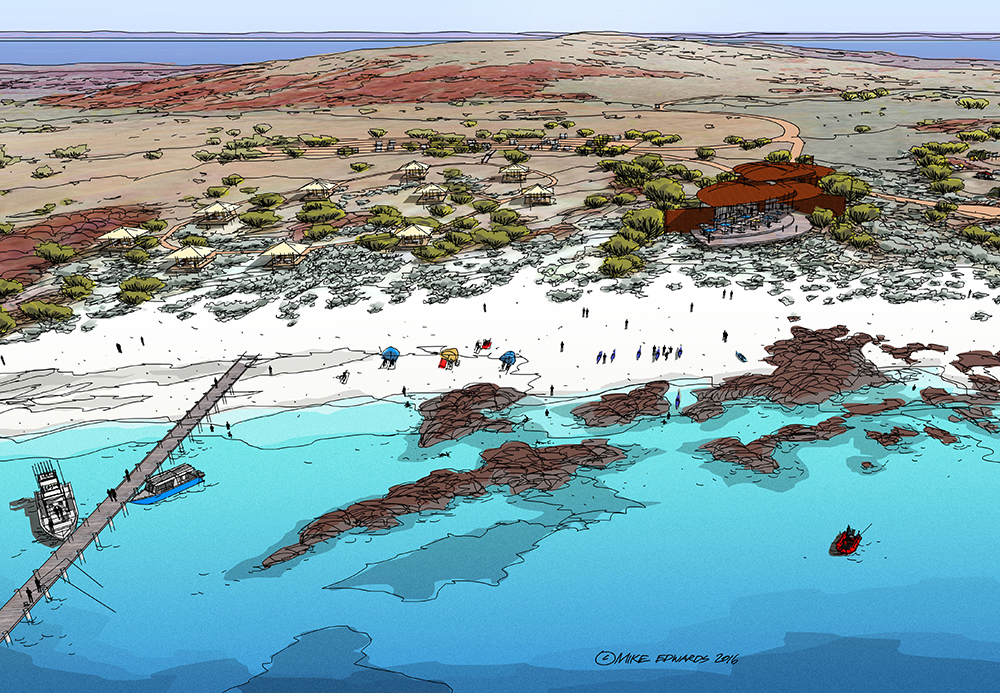 An interactive tourism precinct in the Murujuga National Park for people to learn about Aboriginal land and culture in the Pilbara is a step closer.

Murujuga Aboriginal Corporation (MAC) has appointed RPS Group to undertake a comprehensive flora and fauna survey of the area around Conzinc Bay as part of the plan to create a tourism precinct, which will include a Living Knowledge Centre and campground.

The $32 million project will feature the creation of a state-of-the-art interpretive centre to showcase the cultural richness and natural diversity of the area, which is home to an estimated one million rock engravings dating back tens of thousands of years.
The project will also include a café, gallery and campground, as well as supporting infrastructure such as a jetty and day-use facilities.

MAC Chief Executive Officer Peter Jeffries said the commencement of the survey would be a step forward in turning the Burrup into an international tourist attraction.

“The Living Knowledge Centre is a game-changing opportunity for local Aboriginal people that will celebrate our special cultural and natural environment and raise the bar for tourism across the region,” Mr Jeffries said.

“This is a once-in-a-lifetime project that will see great benefits for Aboriginal people including a boost to local employment, the creation of an unprecedented tourism attraction and celebration of the unique landscape and traditional culture.

“The Living Knowledge Centre will enable the traditional owners of the land to share local Aboriginal culture such as art, language and dreamtime stories in meaningful interactions with visitors.

“We hope that one day, the precinct will be at the heart of a World Heritage Listed area, with the bid for heritage listing already underway,” Mr Jeffries said.

The MAC board signed off last month on the agreement to engage RPS Group, with the flora and fauna surveys due to start in March following the wet season.

“RPS is proud to be involved in what will be an important and iconic project for the region,” Mr Fitzpatrick said.

“Not only will it be a place where local Aboriginal people, the broader community and visitors can immerse themselves in the history of Murujuga country, it will be a place where people can come together to share in the wealth that is Murujuga’s living culture.

“As a pre-curser to the environmental surveys we will undertake across this heritage-listed peninsula, our team has taken part in cultural awareness training to build our understanding of the region’s incredible rock art, culturally significant sites and unique flora and fauna.”
The State Government has committed $8 million to the project, along with annual funding of $1 million for the ongoing joint management of the National Park.

The City of Karratha has committed $3.5 million and will also construct the access road.

Woodside Energy has also indicated it will provide $4 million funding for the project.

The latest announcement comes on the back of the launch of the region’s first rock art tours, which began in September.

The walking tours at Deep Gorge are run by MAC rangers, who conduct a welcome to country, explain the meaning of the rock art and answer questions about Aboriginal culture.

The 90-minute tours have been developed with local tourism consultants Tourism Naturally and are offered daily.