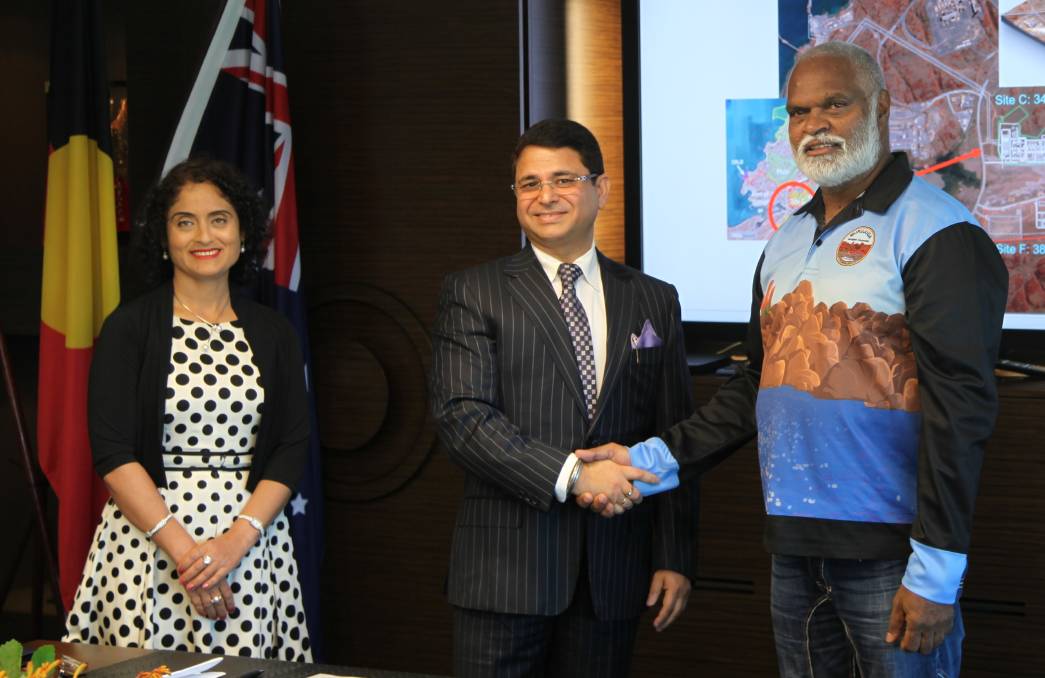 PLANNING and environmental approvals for Australian’s largest urea fertiliser production plant on the Burrup Peninsula, near Karratha, can be sought now the local Aboriginal corporation has backed the proposal.

Perdaman Industries, the Perth-based arm of a private family-owned Western Australian-India conglomerate which hopes to have the US$4.5 billion (A$6.6b) plant operating by 2024, has announced an agreement with the Murujuga Aboriginal Corporation (MAC).

The agreement includes Perdaman contributing more than $11 million over the estimated 25 year life of the urea project to MAC, which represents the Yinjibarndi, Yaburara, Mardudhunera and Wong-Goo-Tt-Oo peoples.

The funding is partly for support and preservation of indigenous art and culture, including the Burrup Peninsula’s extensive petroglyph (engraved) rock art.

Created over 50,000 years, until what is known as the Flying Foam massacre in 1868 drove Yaburara artists from the peninsula, the rock art is subject to a proposed world heritage listing application by the State government.

There have been concerns, leading at one stage to a Senate inquiry, that cumulative emissions from heavy industry on the peninsula could be degrading the rock art.

MAC manages a national heritage listing for the rock art and jointly, with the Department of Biodiversity Conservation and Attractions, manages the Murujuga national park containing it, which covers most of the peninsula.

The national park surrounds the proposed 73.5 hectare urea plant site on Burrup Strategic Industrial Area (BSIA) freehold land leased back to the State by MAC, managed by Landcorp and sub-leased to Perdaman.

The project, first announced two years ago, aims to produce up to two million tonnes of fertiliser grade granulated urea per year, most destined for export from nearby Dampier port where Perdaman is discussing expanded berth capacity to accommodation Panamax size vessels and dock-side storage for urea stockpiles with the port authority.

Like the two Yara plants – the ammonia plant, one of the biggest in the world, was the first industrial development on the peninsula when it began production in 2006 – Perdaman’s proposed urea project will use Pluto LNG as feedstock for its production.

Core components of synthetic ammonia and carbon dioxide derived from LNG will be combined in a two-stage process to produce urea, a more concentrated nitrogenous fertiliser than the ammonium nitrate to be created next door by Yara.

Its urea project includes a refrigerated tank to store up to 10,000 tonnes of synthetic liquid ammonia on site and enclosed sheds at the site and port to store up to 75,000t of urea at both sites.

Granulated urea is proposed to be transported from the production plant to port along the East West Common User Service Corridor, a special purpose services corridor linking the BSIA and Dampier port, via an enclosed conveyor belt.

A 100 megawatt power station, also part of the urea project proposal, may provide electricity to other industrial developments on the peninsula.

More than 2500 skilled contractors are expected to be employed during a three-year construction phase, then up to 200 permanent and 500 indirect employees during operations.

An environmental scoping document for the project was submitted to the Environmental Protection Authority (EPA) in July after a public consultation period in June.

The EPA is expected to release an environmental review document later this month for 12 weeks of public consultation.

Perdaman expects planning and environmental approvals to be completed by March and project finance to be in place by the end of the second quarter next year, followed immediately by a start to field construction.

Mechanical completion of the processing plant is expected by the end of 2023, with start up in the first quarter 2024 and full production by second quarter 2024.

The development has been labelled a Project of State Significance by the State government and received Major Project Status from the Federal government.

Last week Perdaman chairman Vikas Rambal said the company was pleased to contribute to MAC’s commercial unit to help both with opportunities related to the fertiliser plant and for other future projects.

“We will also contribute additional support to the community in relation to arts and culture,” Mr Rambal said.

“That includes $1m to develop the Murujuga Living Knowledge Centre, about $10m over the life of the project to support the Murujuga Future Fund and $150,000 towards the application for world heritage listing of the Burrup rock art.”

As part of the agreement Mr Rambal will become involved in MAC’s strategic growth, dedicating time and expertise to help guide the organisation to enhance its commercial capabilities.

“We are pleased to have forged a working relationship which will benefit both Perdaman and MAC members,” Mr Rambal said.

“We are very excited this agreement includes the opportunity for MAC to develop transport, logistics and housing for Perdaman’s operational workforce,” Mr Jeffries said.

“The diligence Perdaman and its project team have demonstrated and the collaborative approach throughout this process to ratify the deal has been exemplary.”

Perdaman Industries is part of a Perth-based family-owned conglomerate that includes Perdaman Capital which manages syndicated investments in retail, commercial and industrial property and investments in solar and renewable energy, agriculture and new technologies.

Internationally, the Perdaman group provides financial services via a Singapore-based company and in India, where the group was originally formed, it operates pharmaceutical companies producing a range of generic branded drugs, food supplements, dietry supplements and ‘over-the-counter’ products from bases in New Delhi and Hyderabad, with manufacturing facilities also in Ethiopia and Ivory Coast.

According to Perdaman, Australia imports more than one million tonnes of agricultural urea a year.