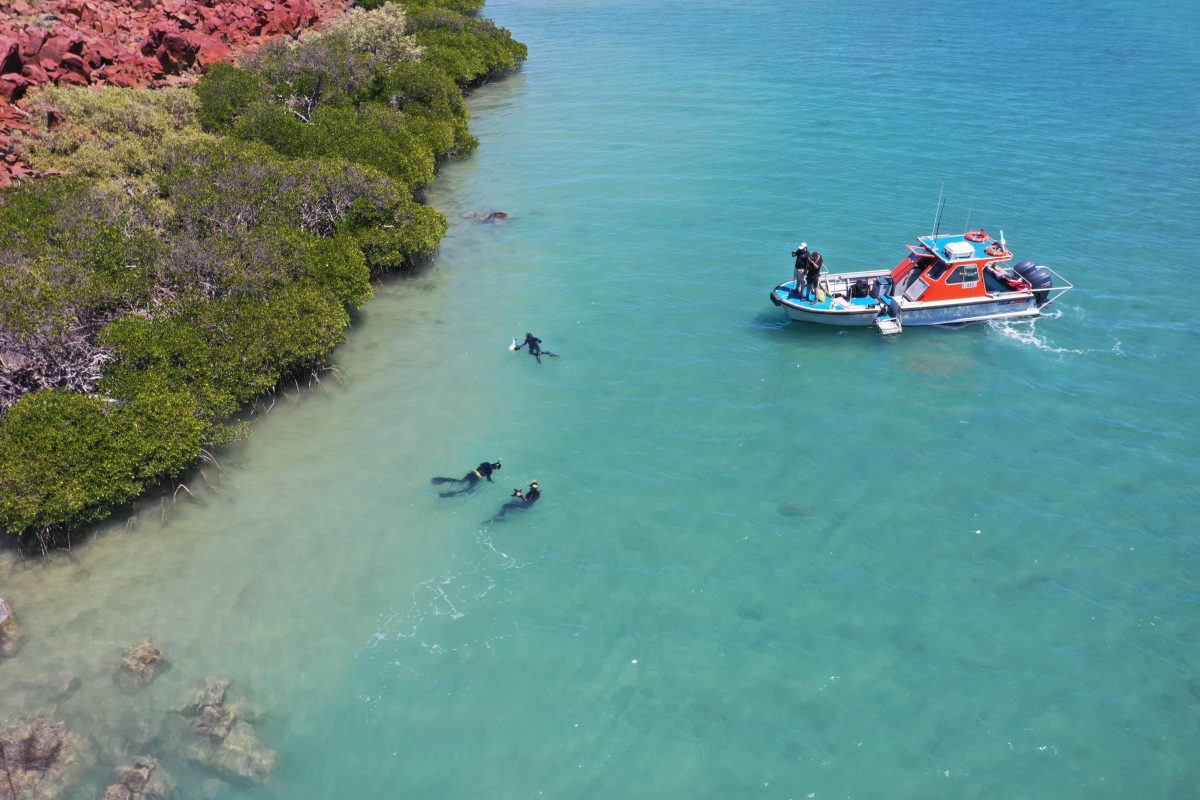 A ground-breaking new study which aims to shine a light on the Pilbara’s early indigenous peoples has unearthed hidden relics beneath the waves on Murujuga sea country.

The stone artefacts were found following an extensive three-year subsea investigation of the ocean floor around the Dampier Archipelago off the Pilbara coast, revealing links with the islands dating back at least 7,000-8,500 years across two key underwater sites.

Remote sensing technology was employed between 2017 and 2019 to uncover potential submerged heritage sites around the archipelago.

Planes fitted with specialist remote sensing equipment were used to scan into the ocean, 12 metres below sea level, to create a map of subsea environment. Side-scan sonar also revealed floor channels and helped identified possible search locations and the potential presence of artefacts.

Scientific divers then used the maps to explore a channel near Cape Bruguieres, at the north tip of Gidley Island, where they made the first big discovery of 269 artefacts in a seabed channel found down to 2.4 metres below mean sea level. Radiocarbon dating and analysis of sea-level changes indicate the items were left in this place by Aboriginal people at least 7,000 years ago when the area would have been dry land.

Submerged and intertidal artefacts were also found on the Flying Foam Passage sea floor between Dolphin, Angel and Gidley islands and included the discovery of an underwater freshwater spring, a billabong with an associated artefact discovered at 14 metres below sea level.

The seabed surface finds at both locations are different to assemblages recorded on the islands during land-based studies, suggesting they are from a different time.

“These latest discoveries could date back more than 8,500 years and will help our community add to the story of Aboriginal people in the Pilbara,” Mr Jeffries said.

“Being Australia’s first Aboriginal under seawater archaeological site ever found in our region, it has been exciting to hear what the researchers and specialist scientists have been able to recover using their advanced technology and skills. Further exploration could unearth similar cultural relics and help us better understand the life of the people who were so connected to these areas of lands which are now underwater.”

Jonathan Benjamin, Associate Professor and Maritime Archaeology Program Coordinator from Flinders University and the DHSC Project team have published an article in collaboration with MAC on the project’s results in the international journal PLOS ONE that is being released today.

Dr Benjamin, who is the corresponding author said “today we announced the discovery of two underwater archaeological sites that were once on dry land.

“More than 30% of Australia’s land mass became submerged below sea-level after the last ice-age, and these new discoveries prove at least some of ancient coastal archaeology is not lost for good, it survived the sea level rise and we just haven’t found it yet” he said.

Dr Jo McDonald, Director of CRAR+M UWA and archaeologist on the underwater project said “the processes we went through to search for and rediscover these artefacts, with no excavation, ensured we had minimal disruption to sea country. We relied on dating landscape features (like beach rock) and the micro-organisms growing on the artefacts to understand the age of the underwater artefacts.”

Further investigation of the archipelago in the future is likely to locate more artefacts below the sea.

“With this, comes a new requirement for the careful management of Aboriginal sea country as it is not automatically protected by current Heritage legislation however plans are progressing to lead this change and protect our land and heritage” said Mr Jeffries.

For further information please refer to: