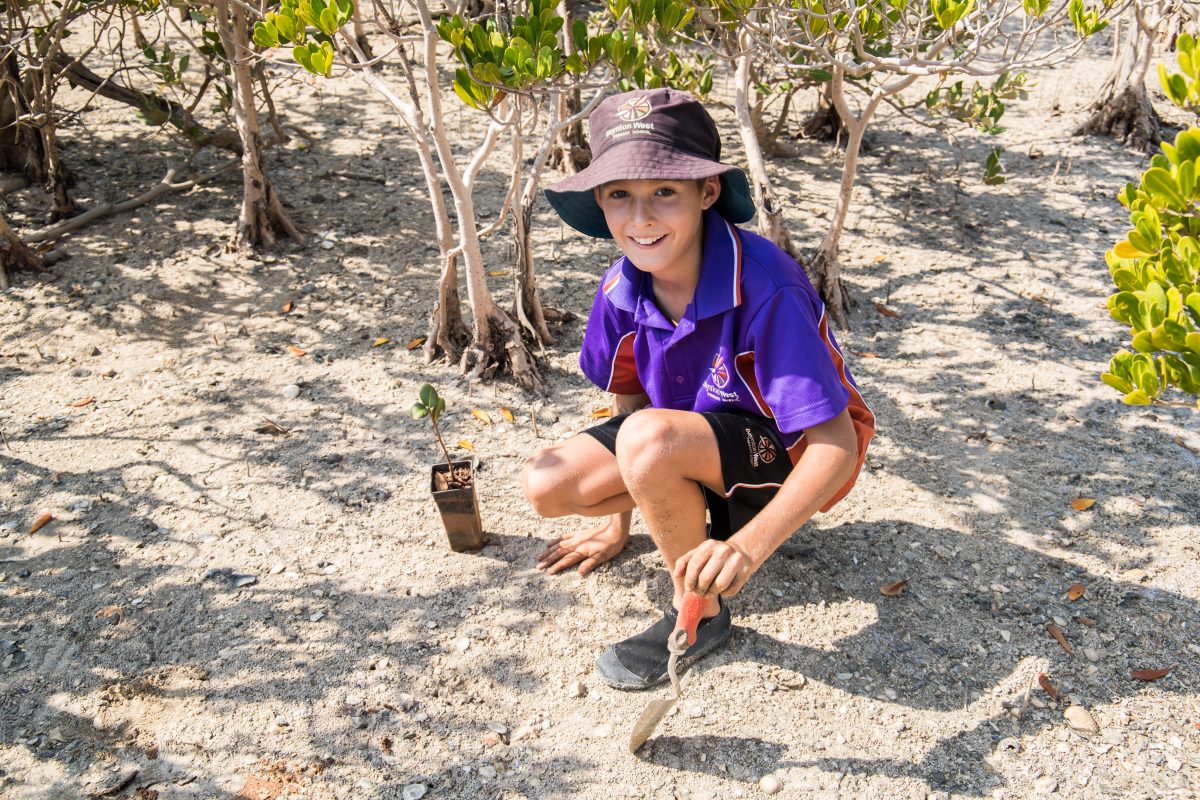 William McNaught from Baynton West Primary School planting the first of the seedlings at Cowrie Cove.

A 1,500sqm area of degraded mangroves in Cowrie Cove is the first of several selected locations in Murujuga National Park to undergo revegetation, aided by a partnership between Murujuga Aboriginal Corporation (MAC), the Department of Biodiversity Conservation and Attractions (DBCA), Pilbara Ports Authority (PPA), Baynton West Primary School and Yara.

The Mangrove Mates program is a PPA environmental education initiative, developed to teach primary school-aged children about the importance of mangroves to the environment.

The program saw mangrove seeds gathered locally from Withnell Bay and planted by students from Baynton West Primary School. The seedlings were then cared for at PPA’s nursery until ready for planting back within the Murujuga National Park.

“It’s great to have our rangers out there working with school kids, the DBCA, PPA, and Yara to help revegetate the area and teach kids about protecting the environment,” he said.

“Mangroves are an important part of our ecosystem, so it’s vital that we get the local community on board to help look after them.

“PPA’s mangrove nursery in Port Hedland holds more than 2,200 viable mangrove seedlings, and around 1,000 of those will be planted in the Murujuga National Park as part of this partnership.

“In the last year more than 350 children from eight Pilbara schools participated in the program, replenishing our mangrove nursery with seedlings for use in rehabilitation and offset projects like this one,” Mr Johnston said.

DBCA representatives have also been involved in the project in their capacity as joint managers of Murujuga National Park and it is hoped the partnership model that has been formed to help revegetate the first area at Cowrie Cove will be replicated as further locations in the national park undergo similar planting.

The first seedlings were planted out at Cowrie Cove this week, and the program will move onto other selected areas in 2023.